As the outrageously flamboyant and immensely talented lead singer of Queen, Freddie Mercury probably wouldn’t have been caught dead in the tidy suburb of Rosemont. But that sure looks like him on the electronic billboard promoting the “One Night of Queen” concert coming up March 15 at the Rosemont Theatre. The show promises to pay tribute to “the greatest rock band of all time.”

As snow and traffic keep me at that intersection long enough to contemplate others in any “greatest” conversation, the billboard switches to an ad touting the Feb. 21 “Let It Be” show, fresh from Great Britain and starring four mopheaded guys in black suits. Now I can’t stop my mind from wondering if Ringo Starr will outlive Paul McCartney to become the last living Beatle. That would be my parents’ equivalent of seeing Joey Bishop become the last living member of the Rat Pack.

“With music, it’s all about memories, and that’s why it works,” says marketing guru Gehrig Peterson, whose Media Consultants business brings all these tribute shows to Rosemont and other suburban venues. “I’m kind of the king of tribute shows.”

Elvis, the King of Rock ‘n’ Roll, would have turned 80 last month if he hadn’t died in 1977, but his memory still sells out the Rosemont Theatre every winter.

“The first time we did the show in Rosemont, it had 12 standing ovations,” says Peterson, who suggests that Bill Cherry, one of the three champion Elvis impersonators in the show, might actually give a better show than the original Elvis. Peterson heaps similar praise on Gary Mullen’s tribute to Queen. “This guy looks and sounds like Freddie Mercury,” Peterson says. 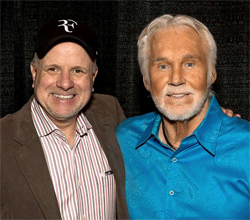 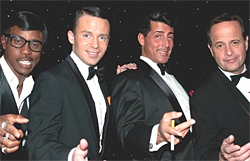 A local non-profit organization that benefits military veterans and their families received a boost from a stage show at the Rosemont Theatre on Saturday, October 19.

A sold-out crowd of about 3,000 people gathered at theater Saturday to watch The Rat Pack is Back, a tribute show to Dean Martin, Frank Sinatra, Sammy Davis, Jr. and Joey Bishop. A total of $80,000 was raised for Salute, Inc., based in Arlington Heights.

This was the third year a fundraising show was held at the theater for Salute, said Gehrig Peterson, the event’s volunteer producer. Peterson, who also produces other shows at Rosemont Theater, said he chose the Rat Pack for several reasons. 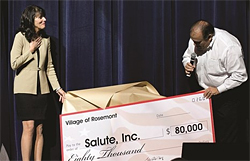 The first two years the event was a magic show produced by the same people that started “Screams In The Park” haunted house at MB Financial Park, Peterson said. This year he booked the Rat Pack to appeal to an older audience, and because it’s been five or six years since the show was produced in the Chicago area.

“I thought it would do well, and I got lucky,” Peterson said.

Peterson said about $33,000 was raised for Salute in 2011, and $37,000 in 2012. Peterson said by marketing to an older audience this year, they were able to raise more money from ticket sales and sponsorships.

“Nothing against the magic show, I just wanted to take it up a notch,” Peterson said.

More than 40 musical acts may be taking the stage this weekend in Boystown, but there are six headliners and up-and-comers that shouldn’t be missed at Northalsted Market Days.

Considered to be the Midwest’s largest outdoor festival, Market Days runs Aug. 9-10 on Halsted Street for six blocks between Belmont and Addison in Boystown. And with three main music stages, the event is packed with performances.

“There is something for everyone,” said Gehrig Peterson, a veteran music director for Chicago Special Events Management, who booked the acts for Market Days (and Pride Fest). “It’s an amazing mix of music from pop, rock, punk to country. Market Days is for everyone and so are the music acts that were selected this year to perform.”

Meeting and Working for Radio Heroes at WLUP – The Loop 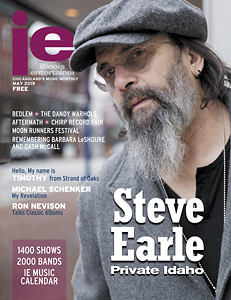 I was 23 years old the day I walked into the Loop offices for the first time. After getting rejections from the other rock stations in Chicago (and there were quite a few at the time), I had thrown a Hail Mary pass to the biggest of them all, The Loop. I wrote a letter to the promotion director of the station, Sandy Stahl. I was absolutely shocked when she called me in for an interview.

Sandy also introduced me to Gehrig Peterson, Steve & Garry’s manager at the time. He was looking for help running Steve and Garry’s fan club and wondered if I wanted a job.

Are you kidding me? I went to all of Steve & Garry’s appearances (and Kevin Matthews’ appearances too–Gehrig was also his manager). Within a year, Steve & Garry’s producer Roman Sawczak decided he wanted to leave the show, and they gave the job to me. For the next few years, I worked for Steve and Garry and learned a lifetime’s worth of lessons. I learned everything through trial and error, mostly error. Every mistake became on-air fodder for Steve and Garry’s sharp barbs. Talk about motivation not to screw up!

Chicago Pride Fest may always seem to draw big names in the music business—like Deborah Cox in 2011, JoJo in 2012 and Aubrey O’Day in 2013—but there’s no denying the festival in 2014 is drawing its biggest yet.

Names like Alex Newell, Betty Who, and the Chicago-born A-lister Jennifer Hudson will take the stage in Boystown come June 21-22. That’s combined with other entertainers like Mya, Thelma Houston and X-Factor’s Carlito Olivero.

So what’s changed? How did Pride Fest move from niche bands, throwbacks and cult favorites to up-and-comers like Betty Who, primetime Glee stars like Alex Newell and international headliners like Jennifer Hudson?

Kotwa also credited the “tremendous efforts” of Chicago Special Events Management (SEM) and Gehrig Peterson for making Hudson’s Pride Fest appearance a reality. Peterson, a veteran music director for SEM, booked a majority of the acts, including Newell and Betty Who. In addition to Pride Fest, Peterson books nearly 450 bands per summer for SEM-produced festivals.

Last week, Howard Stern, during an on-air news conference, denied reports he had started negotiations with Infinity Broadcasting on a new contract. His local outlet in the mornings, WCKG-FM 105.9, can only sit this one out and cross its fingers that he will, as expected, decide to continue his radio career and make a lot more money.

That then leaves WCKG General Manager Michael Disney and program director Gehrig Peterson to other worries, like re-signing two other major stars–midday host Jonathon Brandmeier and afternoon personality Steve Dahl–that form the core of a high-priced lineup that has lifted their station from relative obscurity to one of Chicago’s biggest moneymakers.

Chicago’s comedy-club business appears headed for a shakeout. Too many clubs, too few loyal customers, and too little drinking seem to be the key problems. Two years ago the city and suburbs saw a rapid proliferation of comedy clubs, including the Funny Firm, Catch a Rising Star, and the Chicago Improv. Sources say that since that tidal wave of openings, club managers have increasingly been forced to turn to free passes (“papering”) to fill their many seats, while counting on drink tabs to cover operating costs.

The Funny Firm has hired sports and media consultant Gehrig Peterson to look at their situation. “We’re going to be evaluating operations at the club and making some marketing suggestions,” says Peterson. And Catch a Rising Star has a new manager, Bob Hillman, a former television sports anchor and stand-up comedian. Catch also is experimenting with talent lineups that go beyond the traditional stand-up routine.

As expected, WCKG-FM 105.9 named Gehrig Peterson head of operations at the station. He effectively replaces former Program Director Reid Reker, who left to become head of KYNG-FM in Dallas.

After only 16 months as head of news at NBC-Ch. 5, Phyllis Schwartz said Monday she’s leaving the station.

The 44-year-old veteran news executive got her wish to return to her hometown of San Diego to become president and general manager of NBC-owned KNSD-TV in that market.

The move was unusual in that most general managers come from the ad sales and financial sides of the business, not from news.

Schwartz made big news when she jumped from ABC-Ch. 7, where she was news director, to become vice president of news and creative services at Channel 5 during the May ratings sweeps period last year.